My recently bought C64 breadbox came with the power supply which looks like a shim. The DIN connector only has 4 pins. Unfortunately it was broken somehow and since it is pured in resin it couldn’t be repaired easily (at least by me).
Looking for a replacement I found a lot of places which state the original C64 power supplies as unreliable and often responsible for a broken C64. Better would be a “new” switching power supply which was handmade and barely available these days.
I also read that the C128 has a switching power supply which delivers the same Voltage (9V~ and 5V-) as needed by the C64 but with a different power connector (square). So, why not use a C128 power supply for a C64?
I got my hands on a used C128 power supply from ebay. Unfortunately it was broken too. But the C128 power supply isn’t pured in resin and can be opened easily by removing four screws. After looking a little closer and doing some measurements the fix was quite easy by replacing the fuse on the primary side (the C128 power supply uses two fuses, both slow blow: one 315mA on the primary side and one 1.4A on the secondary side (AC)).
Okay, the power supply worked again but how to replace the square connector by the DIN one for the C64? I’ve got a few male DIN connectors but fiddling with it wasn’t m first option. Why not use the power cable from the original power supply? The shim was easy to open if you use a screw driver and a little force on the small end of the box. Even the plastic pins in the resin came out easily. Below a picture of the open C64 power supply with the DIN power cord already desoldered: 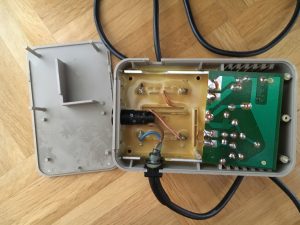 I desoldered the C128 power cord to leave it intact in case anyone has a need for it. I read that the square connectors are difficult to find: 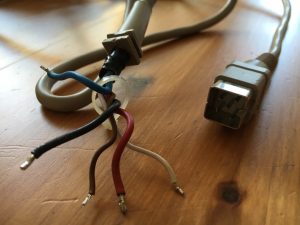 Afterwards I soldered the C64 power cord to the C128 power supply by using the following color code:

The ground (earth) wire isn’t needed for the C64.
The C64 power connector (female) looks like that:

The C64 power cord uses pin 4 for the 5V DC whereas on another C64 power supply only pin 5 providing the 5V (note: on the male side the pins are horizontal mirrored). Interestingly my C64 breadbox worked with both configuration.
Below two pictures of the C64 power cord soldered on the C128 power supply: 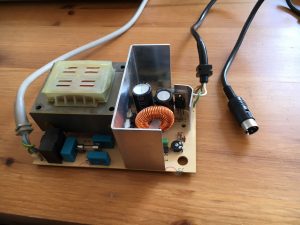 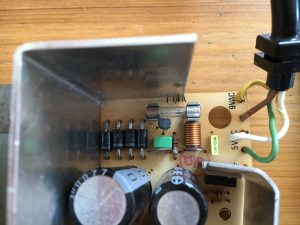 And finally the whole unit assembled: 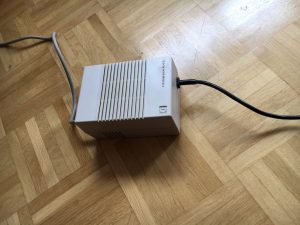 Measuring the 5V DC on the C64 user port shows only 4,8V DC. The C64 still works but maybe I have to adjust the Voltage a little bit. Fortunately that’s possible via a variable resistor for the 5V line.