I’m still trying to learn on FPGA’s by porting simple stuff. Consoles and some 8 Bit home computers are easy to port as often the bios, vram and ram fits in the block ram of the EP3C25E144C8 (Cyclone III) used in the MiST.
The MiST doesn’t have any sram nor flash which is used by some ports for the ram and the bios. The fpga used in the MiST has 608,256 kbits block ram which makes around 76 kbyte addressable space which I can use to ease porting 🙂
And again I found my next project in the big pacedev source archive. It has a few Apple II projects including the II+ and the IIe. One of the Apple II+ sources seemed to be an usable candidate and I took the project of Stephen A. Edwards 1980s-era Apple II+ for porting it to the MiST.
Its not ready for prime yet as it needs some cleanup and there’s no support for external disks or programs but you can already type in some simple basic programs: 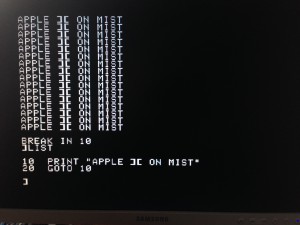 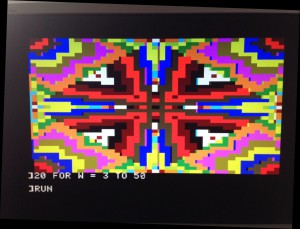 One thought on “Apple II+ running on the MiST”