I’ve moved the colecovision MiST port from the pacedev repository into its own repository to be independent from the pacedev framework. While touching the code I’ve added the possibility to load files with the .bin extension and to disable the scan doubler.
Latter option is untested as I don’t own a capable monitor.
The binaries are at the usual place and the new source home is here:
https://github.com/wsoltys/mist-cores/tree/master/fpga_colecovision

Current FPGA boards have support for a sdcard but not all cores support it. There’re some classic cores (like Acorn Atom or the Spectrum) which do it with an extension ROM. But often the sdcard needs to be in a special format not readable by a PC which is also a problem for the MiST because it needs to load the core from a FAT filesystem and currently its not supported to change the sd card during runtime.
Another solution is to instantiate a second CPU which does the FAT reading and injects the code into RAM addressable by the core. But this comes with extra code because its like a second machine with own bios inside the fpga. Examples for that are the MSX and PC Engine port for the MiST.
Wouldn’t it be nice to keep requirements small and read a FAT filesystem directly in the core?

The FPGAmstrad core from Renaud Hélias raised the idea but I wanted to code my own module for learning purpose. But where to start? First I needed a library to easily read the sdcard block by block. I found code from XESS which was a good start (https://github.com/xesscorp/VHDL_Lib/blob/master/SDCard.vhd).
Next was a comprehend guide to understand FAT. A good summary with the most important bits are Paul’s 8051 Code Library.

The code is written around a FSM (finite state machine). I started with reading the first sector of the sdcard to determine the first partition. Before reading the first sector of the first partition the code checks if its a valid FAT filesystem and what type it is. The current code supports only FAT32 and one partition. But this should cope with most situations as today you can only buy SDHC cards but even SD cards can be formatted with FAT32.

Once we have the LBA of the first partition we read the first sector and derive some important values from there:

sd_factor is 512 for SD cards (byte addressing) and 1 for SDHC cards (block addressing).

Once found the entry contains the file size and the starting cluster. From there we can read the file sector by sector and cluster by cluster. For my 4GB SDHC card the cluster size was 4KB (8 sectors * 512byte). After reading a full cluster we need to find the next cluster via the FAT and so on.

The current code is still work in progress as it contains a lot of debug stuff and is missing some important bits:
– Reading longer directories via FAT
– Optimize code as it currently takes up to 12.000 LE’s on a Cyclone III (and I have no idea why)
– Support subdirectories
– Support writing would be nice but I don’t think that I get to it soon

At least it works which was a good start for me 🙂
The code is in my github repo as usual if you want to give it a try.
https://github.com/wsoltys/mist-cores/tree/master/misc/sdcard

Disclaimer: The code was written for learning purpose and might be highly inefficient. I’m open for any suggestions to optimize the code.

Update 2015/03/08:
Added DE1 board files and a small bug fix. Fixed the repo link below to point to the right revision.

During my efforts to learn more about fpga’s I found a nice tutorial about VGA in VHDL on the DE1 board on youtube.
I was surprised how easy it is to do it when you got it explained 🙂

In short, you draw the pixel line by line on the screen and every line contains an active video phase in which the rgb pixels are sent and a blanking region which is divided into the front porch, sync pulse and back porch (see image below).

It turned out that by starting with the visible area first the bending which was visible on the horizontal line is gone. I’ve updated the code accordingly.
The pixel clock and the pixel count of front porch, sync pulse, back porch and the active video phase is defined and can be seen here:
http://www-mtl.mit.edu/Courses/6.111/labkit/vga.shtml
http://tinyvga.com/vga-timing

From the figure above we see that HSYNC is only zero during the sync pulse. The same is valid for VSYNC. And thats exactly what the code above does.

The code above sets our pixels. The first section sets the rgb values to zero when we aren’t in the active video phase. Then the background is set to blue and “overdrawn” by white when the HPOS and VPOS matches certain values which will show a horizontal (HPOS) and a vertical (VPOS) white stripe in the middle of the screen.

The full source code of this example together with the Quartus project files for the MiST can be found here:
https://github.com/wsoltys/mist-cores/tree/77fea2dc1e3986daa9138dbb2fa91fd8267c3c9e/misc/vga 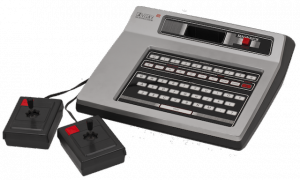 After some bug hunting and an unsuccessful attempt to get a screen output from a new core I looked for an easy port to get something done. As usual I found something in the huge pacedev archive and on the fpgaarcade page: Arnim Laeuger’s implementation of a Videopac console.
It still needs some finishing but overall it works fine. 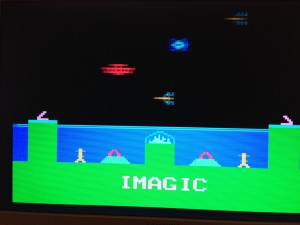 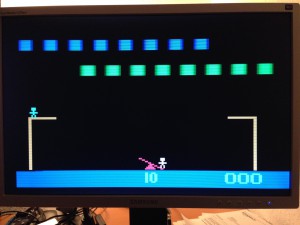 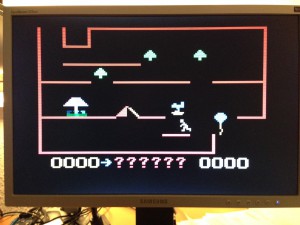 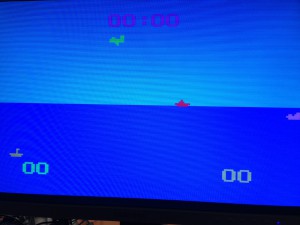 There’s no binary release yet but if you wanna try it you can compile it from the sources at:
https://github.com/wsoltys/mist-cores/tree/master/fpga_videopac

Now the core works with only one usb joystick attached.
With the bugfixed cpu core more games work including Dark Dungeons which didn’t run before.